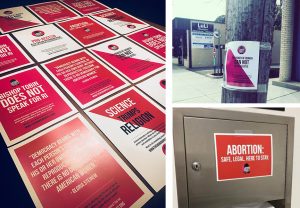 The Womxn Project (TWP, previously The Woman Project) was formed in 2017, by a few passionate and outspoken Rhode Island womxn, to educate others about Rhode Island’s regressive abortion laws. What began as a protest of the present moment has become a movement for change.

While Rhode Island was the first state to promote religious freedom, for far too long reproductive freedom has been quietly governed - if indirectly - by the Catholic Church.

TWP was created to let Rhode Islanders know the truth: if Roe v. Wade is overturned at the federal level, RI will have no law to protect the right to abortion. Most Rhode Islanders, living in a ‘blue state,’ did not realize that without Roe vs. Wade, RI could revert to old laws which are among the most restrictive and oppressive in the entire United States.

That is why TWP balances artistic events and traditional actions to make change locally or at the state level. These are some of the action TWP will make, online or physically somewhere, to add our voice to the many calling for change.

We are all grieving and outraged at another brutal and unnecessary police shooting. The death of Daunte Miller after a traffic stop is yet another horrific example of the violent effects of racism and systemic oppression. We can mourn and grieve, but we must also make sure that we are doing all that we can to dismantle white supremacy.  We must ensure that Black … END_OF_DOCUMENT_TOKEN_TO_BE_REPLACED

While we have been working hard to protect the right to abortion in Rhode Island and expand abortion access for low-income individuals and state employees, the anti-abortion folks have introduced SIX DIFFERENT BILLS being heard this Friday, April 9 at 2 pm that could impact – or even take away – access to abortion completely.  We need to SHUT DOWN THESE BILLS! H 5865 and H … END_OF_DOCUMENT_TOKEN_TO_BE_REPLACED

We know you know how important it is to DEMAND action and engage with our elected officials. But couldn’t we all use some pointers on how to be more effective advocates? In partnership with the National Women’s Law Center, The Womxn Project co-hosted a (virtual) testimony writing workshop and social hour! Join the guest speaker, Peshka Calloway, as she gives an amazing … END_OF_DOCUMENT_TOKEN_TO_BE_REPLACED

In the wake of the violent attacks on Asian American women in Georgia, it is critical that we not only speak out against hate, but also take action to dismantle white supremacy. This must include addressing the barriers to voting, which shapes the system that has so much of an impact not only on our lives, but also on society and culture and the way in which marginalized people … END_OF_DOCUMENT_TOKEN_TO_BE_REPLACED

A right is not real if people can’t access or afford that right. Right now, state employees and people who use Medicaid are told that their insurance plan won’t cover abortion. That means we still have work to do! Everyone deserves to have the health care they need at a cost they can afford – and that includes being able to obtain an abortion. We are honored to work with … END_OF_DOCUMENT_TOKEN_TO_BE_REPLACED

We are so thankful for the support we saw this week with the launch of our campaign teams around the Equality in Abortion Coverage Act. If you haven’t had a chance to sign-up for one or more of our efforts, please take a moment TODAY to join. We are excited to get things rolling. Our first batch of new postcards are headed to the printer and will get into people’s hands. We … END_OF_DOCUMENT_TOKEN_TO_BE_REPLACED

As the public health and financial crisis continues, many people are having a difficult time. All Rhode Islanders deserve the peace of mind that they can obtain the health care they need, including abortion! JOIN THE WOMXN PROJECT CAMPAIGN TEAM! We are launching a series of exciting initiatives to build momentum and support. We need YOU! We are thrilled to work again … END_OF_DOCUMENT_TOKEN_TO_BE_REPLACED

Have you heard? RI has a SPECIAL ELECTION tomorrow. Of the seven bond measures on the ballot, Bond #3 resonates most with TWP as we believe it advances  reproductive justice. If approved, Bond #3 would provide a $65 million housing and community opportunity bond that will help fund the production and preservation of affordable homes in Rhode Island. Housing advocates … END_OF_DOCUMENT_TOKEN_TO_BE_REPLACED

The legislation to get rid of bans on health coverage for abortion for state employees and the Medicaid program was just re-introduced. Before we even got a chance to share the fantastic news and thank the incredible lead sponsors, Rep. Liana Cassar and Sen. Bridget Valverde and the 26 House sponsors and 21 Senate sponsors, Senate leadership decided to play politics with our … END_OF_DOCUMENT_TOKEN_TO_BE_REPLACED

Tuesday, February 2, 2021  |  Download .PDF Governor Gina Raimondo Lieutenant Governor Daniel McKee 82 Smith Street Providence, RI 02903 Dear Governor Raimondo and Lieutenant Governor McKee: As an organization committed to ensuring all people can access reproductive health care, including abortion, we believe that each of us should be able to make decisions about … END_OF_DOCUMENT_TOKEN_TO_BE_REPLACED

The Womxn Project invites you to help enrich "The WELL" ("El Pozo") with your company, your activism, and your interest to learn, as education is power! "The WELL" is a bi-monthly gatherings as we look into 2021 and get a range of perspectives on what this year is looking like from the perspective of a range of subject matter experts. The landscape looks different and … END_OF_DOCUMENT_TOKEN_TO_BE_REPLACED

Good Evening Chairman Corvese and Members of the House Rules Committee: My name is Jocelyn Foye. My preferred pronouns are she/her. I live in Wakefield, Rhode Island, and I am the Executive Director and Board President of The Womxn Project. I am speaking in support of House Resolutions 5006, 5007, 5008, 5009, 5010, 5011. The Womxn Project is a grassroots organization … END_OF_DOCUMENT_TOKEN_TO_BE_REPLACED

Amazing news out of Georgia, literally shocked about the terrorist attack at the US Capitol building RIGHT NOW. Clearly we look forward to a government that is more representative and continue the conversation about we want the state and country to look like while investing in the leadership and vision of women of color. So trying to step back from this chaos and reflect, I … END_OF_DOCUMENT_TOKEN_TO_BE_REPLACED

Today marks 47 years of the Helms Amendment, a racist, white supremacist policy exporting US politicians' attempts to control abortion information and access and deny bodily autonomy.  Helms denies the use of US funds to ensure safe abortion services. It causes great harm, especially to Black and Brown people around the world.  The Womxn Project is proud to endorse … END_OF_DOCUMENT_TOKEN_TO_BE_REPLACED

“Here’s to the future because we got through the past.”  –  Salt-N-Pepa What does 2021 hold for The Womxn Project? Broadly, we intend to mobilize, energize, and lead! Here’s just a taste of what to expect from us: Insurance coverage bans for abortion services are soooo 2020 (you know, tragic and synonymous with racial injustice). We want to close the gaps in access … END_OF_DOCUMENT_TOKEN_TO_BE_REPLACED